Last semester, one of my students learned that "Eff you!" was a bad word (probably from music or an older student). Despite my efforts to convince him that it's pronounced "funny," he continues to occasionally spit out the occasional "You are eff you" before class, and it's really hard not to laugh when he does it, because he says it with such enthusiasm, panache, and genuine happiness.
Posted by Will at 5:30 PM 2 comments:

There are thousands of articles online about the crazy pace of development in China, and I know everybody talks about the development of big cities like Beijing and Shanghai, but things are changing pretty rapidly out here too.

In the past year and a half my school has:

I didn't actually think about much of this until the past break, where I went back home. I don't think I saw a single crane the entire time I was in the U.S., and I don't know that I even saw any buildings under construction. In a single drive near Kunming, I counted over twenty cranes before I got bored. It's really going to be crazy to come back here in a couple of years, and see how much it's changed.
Posted by Will at 7:16 AM 4 comments:

It's weird to realize that at some point in the past year and a half I started thinking of Songgui as home. Even though I spent four years at Georgetown, I never felt that it was a home for me in the same way that Songgui is. I'm not really sure what the difference is--maybe having a job?--but it definitely felt good to get back here, and I know I'm going to miss this place when I leave.

I don't actually have any pictures of around Songgui, which I need to change. It's just hard to remember to take pictures of the places that you see everyday. So, instead, here's a picture of Tian Minghao, one of my students from last year: 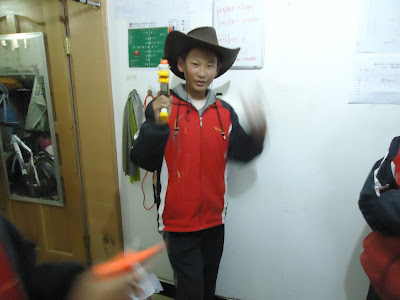 Things I was glad to come back to

1. Great friends.
2. A good bowl of rice noodles in broth. (The ideal bowl is served under a tent by the side of the road, and has a good splash of vinegar, some pickled peppers (seriously), 3 or so spoonfuls of crushed peanuts, and a little bit of crushed hot red pepper)
3. My students + teaching
4. My toilet (as long as you're not food poisoned / have giardia, squatting is better)
5. Being able to walk everywhere
Posted by Will at 5:59 PM 2 comments: