After a little over two years, I've finally finished my Teach for China commitment, and am going to be flying home tomorrow. It was a really big experience, so I'm still trying to figure out my own thoughts.

Over the past month I was a subject pedagogy trainer for the new fellows, teaching them about teaching grammar, writing, vocab, and all that good stuff. It was a really fun time. The second year fellows who decided to stick around during the summer to help out the first year fellows were all great, and permanent staff are pretty awesome too. It was really great getting to meet the new fellows, and it was pretty interesting to see how innocent, clueless, passionate, and hopeful I was two years ago. And S.I. was run a lot better than it was in my year--fellows are going to be a lot more prepared for their classrooms, but it's still going to be an incredibly hard experience.

Looking back to my S.I. and thinking about the kind of impact I was hoping to make in my classroom makes me laugh--I just completely lacked context and understanding of what it was that I had signed up to do. I definitely did not make the impact that I thought I was going to make, but I don't have any regrets about my two years; I was a good teacher to my students, and that's what matters. I think I'm leaving TFC a lot more changed than my students are, but I think that that's true of most fellows, and I think that most of us don't regret coming out here.
Posted by Will at 9:19 PM 2 comments:

The other weekend, the Heqing (my little region) second years got together to take pictures before we all leave, and it was awesome. We went into the nearby big city, and found a photographer, and basically got to play dress-up for a couple of hours while taking ridiculous pictures. All the ladies got to spend over an hour getting made up professionally, and then we all spent a few hours with the photographer. It was definitely the kind of thing that I don't think you can do back home.

Anyways, here are a few of the pictures: 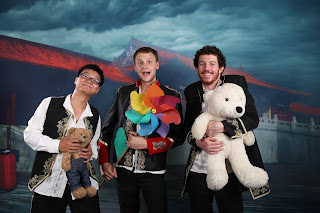 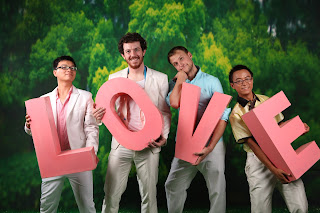 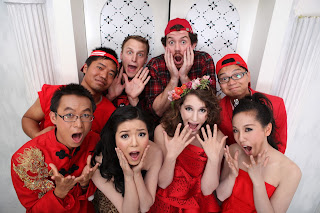 Over the weekend, I went on an epic bike ride with some friends, and got pretty sunburned. I went to class last night, and because I was so red, my students were convinced that I must be drunk.I was not entirely successful at convincing my students that "sunburns" exist and can turn their teacher bright red. Even after showing them my nice tan-lines, some students remained skeptical.
Posted by Will at 3:55 PM 2 comments:

After these last few weeks of teaching, I'll be heading to Summer Institute, where I'll help train the next cohort of fellows. I'll be a subject pedagogy instructor, so I'll be helping to teach the new fellows how to teach English. We had a very minimal amount of instruction in how to teach our subject during our S.I., and as a result, much of the first semester and year was spent figuring out how to make students remember vocabulary words (motivation, repetition, self-study time, checks for understanding, spiraling review, and a variety of activities), how to teach students to write essays (spelling dictations, fun sentences and sentence frames, dialogues, and scaffolding), or even how to teach the ABCs (the Chinese alphabet song is better, your handwriting needs to change to the standard Chinese way, explicitly teach word spacing, make sure students don't write 'a,' 'g,' or 'l' the way it looks when it's typed, make sure students actually cross the bottom line in their notebooks when they write 'j,' 'y', 'g,' 'p,' and 'q'.....). There's a ton of English pedagogy specific knowledge that fellows should know before they enter the classroom if they're to have any hope of giving effective English instruction.

It seems crazy to me that with only two years of experience I'll be one of the people responsible for teaching the new fellows how to do all of this. The two years of experience I have is extremely relevant to what fellows will be doing (foreigners who have taught in rural China are rare), but some days I really wish someone with more experience and knowledge was coming to help run the sessions; I'd love to be that person's assistant.

Summer Institute is going to last about a month for fellows, and I know everyone who will be working there has been spending tons of time and effort preparing, but it still seems a little crazy to me that we'll be putting new teachers in the classroom after just a month of training. Summer institute has been getting better and better every year, but there's still only so much you can teach people in a month, no matter how dedicated those people are. The first semester and year are rough for new teachers everywhere, and I think it's a reflection on the kind of people that come to TFC that only 20-30% of people quit after the first year or teaching with the minimal preparation that we're given.
Posted by Will at 7:46 PM 2 comments:

Today marks exactly a month until I'm done teaching, and done with my two year commitment to TFC. It's weird; it feels like I haven't been doing this for very long, and yet I'll soon be moving on to the next thing. I've definitely changed a lot over these past two years, and while I'm a much better teacher than when I began, I'm still a beginner, and if I were to continue teaching, I don't think I'd really be a good teacher for another couple of years. That's really the problem with TFC's model--no foreign fellow ever keeps teaching in rural China for a third year, and only a handful of Chinese fellows have stayed, so our students never get a TFC trained fellow with the sort of experience that you need to be a truly powerful teacher. Some very few teachers might be great during their first and second year, but it's rare.

All of this is not to say that TFC fellows haven't done awesome things and been successful in the classroom. Fellows, especially Chinese fellows, have done a lot of really cool thing, both in and out of class, but I'd love to see what some of the great people that have chosen to dedicate two years to teaching rural Chinese kids could do with five or ten years of experience.

I think I've been a good teacher, especially in this second year, but I often feel like I've gotten more out of this experience than my students have.

And here's an Onion article that's too true to be funny
Posted by Will at 10:40 PM 2 comments:

Before this year started, I thought I was going to only be teaching one class, and would have plenty of free time to be working on tons of other projects. I wanted to do tutoring, and run an English corner, but the main thing that I wanted to do was start a girls' soccer team. Sadly, I haven't had time (or energy....mostly energy) to start it, but I've started occasionally taking my students out when they've been good to play soccer, and it's been awesome.

I haven't actually been trying to teach them how to be good at soccer, I just want to give them a chance to run around and play. As of now, the instructions I have given:

1. Don't use your hands. (Some of the boys have added to this: if you use your hands, you have to drop down and do push-ups.)
2. Try to use the inside of your foot when you're kicking it.
3. Kick it between the cones.

It works out surprisingly well. I let them divide up into groups, and play. It's a madhouse, but everyone has fun, and trying to organize 55 kids and teach them to actually play soccer and run drills by myself just sounds like a nightmare.

Anyways, they've been playing soccer, and it's been great to see everyone running around, especially some of the girls who just haven't had a chance to compete and are getting really into it. Getting called over to a 6v6 little game because one of the girls was so proud of getting a goal by kicking it through another girl's legs is definitely one of the happiest memories I'm going to leave here with. I've taken a few pictures, but none of them turned out very well, so I'll try again and upload them later.

(I'll also try and update this blog around once a week between now and the end of the year. I've been doing applications for next year, programming prep work, and prep work for summer institute (I'll be an instructor for next year's fellows) and I've been a little overwhelmed, but I'm getting back on top of things.)
Posted by Will at 11:17 PM 3 comments:

The Chinese English curriculum is a funny thing. The vocabulary and topics that are students are expected to learn often borders on the ridiculous (which is something that I should probably write about at some point). That said, one of my favourite inconsistencies is that between sixth and seventh grade, the textbooks switch over from British spelling (favourite, colour) to non-British spelling (favorite, color). It's never addressed, and I just think it would be odd to be a seventh grader and be thinking that whoever wrote my elementary school textbooks wasn't very good at English or something.
Posted by Will at 9:55 PM 1 comment: